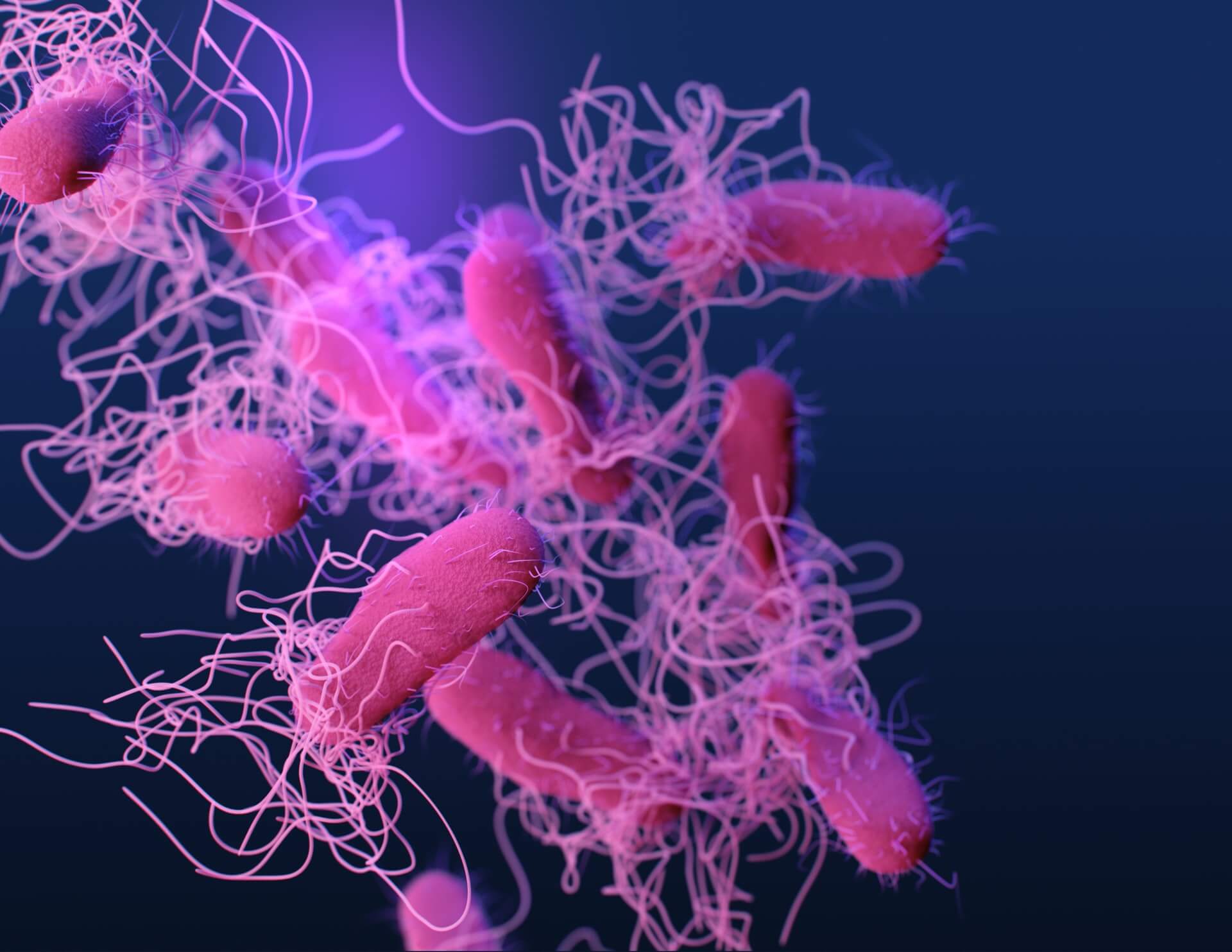 Image of drug-resistant Salmonella sp. bacteria by CDC on Unsplash

Antibiotics were the wonder drug of the 1900s, helping the immune system to fight off bacterial infections and saving millions of lives. However, decades of misuse and overuse of antibiotics have led to many strains of bacteria developing resistance, and this is becoming one of the greatest public health threats to humanity.

We need a new solution, fast, and scientists are turning to an unlikely friend to help us: one of the oldest, most deadly, entities on Earth: viruses.

London, 1928: the discovery of penicillin

The discovery of penicillin, the first true antibiotic, was one of medicine’s many happy accidents. Alexander Fleming, Professor of Bacteriology at St. Mary’s Hospital in London, in 1928, noticed that ‘mould juice’ forming on an uncovered culture plate produced by a type of mould called Penicillium notatum, and could kill certain types of bacteria that caused infections.

By the 1940s, thanks to the work of Howard Florey, Ernst Chain and their colleagues at Oxford University, this discovery was turned into the life-saving drug, Penicillin, which quickly became known as ‘the wonder drug’. Before this, a simple case of pneumonia, tonsillitis and even infected cuts and scratches could often result in death.

The importance of bacteria

We now have many different antibiotics available to us, some that work on specific bacteria and some that attack a wide range of bacteria. However, not all bacteria are bad! In a human being there are over 100 trillion microbes (bacteria, viruses, fungi and protozoa) living on and inside us, contributing up to an unbelievable 2kg of our body weight. We couldn’t live without them. Some of the bacteria in our gut help us digest our food, help our immune system and even produce vitamins.

We have relied on antibiotics to cure infections caused by bacteria for many years but bacteria reproduce really quickly (some can divide every 20 minutes) and sometimes when they reproduce, they mutate or adapt and become better at protecting themselves against the antibiotic. We now have some bacteria that have become resistant to all antibiotic treatment. These are sometimes called ‘superbugs’. Globally, at least 700,000 people die each year due to drug-resistant diseases.

So what’s the solution?

Firstly, prevention is always better than cure. Good hygiene such as: regular handwashing; careful storing and preparation of food; cleaning surfaces regularly (ideally soap based, not antibacterial solutions); sneezing into a tissue or sleeve, rather than our hands, are all important in preventing infection. It’s also critical to keep up to date on vaccinations. However, if we do get an infection we may need treatment.

It’s also very important to take antibiotics responsibly: only using them when necessary, and using them with care.  Many infections (such as COVID-19, colds, flu and chicken pox) are caused by viruses and an antibiotic will not help – they are only effective against bacterial infections. Using antibiotics in this case could actually cause us problems through killing off some of our useful bacteria. But if a doctor believes an infection has been caused by bacteria, and if your immune system is struggling to fight it off,  they may prescribe antibiotics. If you are prescribed antibiotics, it’s important to follow your doctor’s advice on how long to take them, and to never share antibiotics with anyone else or use anyone else’s antibiotics.

Killing bacteria with a virus??

In the case of treating an infection caused by bacteria that are resistant to antibiotics there is still hope in an unexpected form… the deadliest entity on Earth – the bacteriophage (which literally means “bacteria eater”). Sometimes shortened to ‘phages’, these little viruses infect bacteria but leave human cells unharmed. They were first discovered in 1915 by William Twort, and then independently in 1917 by Felix d’Herelle who realised that they had the potential to kill bacteria. Decades before the discovery of antibiotics, phages were being successfully used to treat bacterial infections in humans in a process called ‘phage therapy’. However, after antibiotics were discovered the use of phages became less common, mostly because administering antibiotics was so simple. However, phages continued to be used routinely in Eastern Europe, particularly in Georgia, Russia and Poland, both as an alternative treatment to antibiotics and in combination with antibiotics.

Phages look like something from science fiction. They are tiny, ranging between 24-200nm long (1000 times smaller than the thickness of an average human hair and about the length that a human nail grows in 20 seconds!) They have a head (or capsid) made of proteins that contains either DNA (deoxyribonucleic acid) or RNA (ribonucleic acid). Their heads can be icosahedral (like a die with 20 faces) or long and thin. Most have a tail, which is a hollow tube through which they inject their genetic material into the bacterium that they are attacking. Some have a base plate and tail fibres (like legs) at the bottom of the tail which help the phage to clamp onto the bacterium.

There are an unbelievable 1031 phages on Earth making them the most abundant biological entity on the Earth. If you were to line them up head to tail they would span the Milky Way a thousand times! They can be found anywhere on Earth and in theory there should be a phage capable of killing every single type of bacteria on Earth.

What do phages do?

One of the reasons ‘phage therapy’ went out of fashion was the specificity of phages. Each phage will only prey on a particular type of bacteria. So to treat a bacterial infection with phage therapy, you must first find out exactly which type of bacteria is causing it and then find the corresponding phage known to work against those bacteria. This takes time and effort but once the correct phage is identified, it can be injected at the site of the infection and the phages will destroy the bacteria but leave all other cells and other potentially ‘good’ bacteria unharmed. This specificity that used to be considered a disadvantage is now considered one of the huge benefits of phage therapy when compared to antibiotics. Some non-specific antibiotics destroy a whole range of bacteria and can have a negative and long-lasting impact on the gut bacteria as well as a number of other negative side effects.

Phages can be used on their own to attack specific bacteria but can also be used in combination with antibiotics in a two-pronged attack. Bacteria can adapt to protect themselves from attack but in order to protect themselves from the phage, the bacteria adapts and becomes more vulnerable to attack from the antibiotic. Similarly in protecting itself from the antibiotic it becomes more vulnerable to attack from the phage. When they are used in combination, phage therapy can even cause a reversal in the antibiotic resistant behaviour of the bacteria. Although bacteria can become resistant to a particular phage, it is very unlikely for them to become resistant to all phages.

The main reason that phage therapy is not yet routinely used in the UK is that it has not been tested under UK clinical trial conditions. It has, however, been used in emergency cases in the UK, the US and Europe, when antibiotics have failed. For example, 17-year old Isabelle Carnell-Holdaway was successfully treated with phage therapy at Great Ormond Street Hospital for Children – she suffered from cystic fibrosis, and contracted a bacterial infection that spread throughout her body and did not respond to antibiotics. To use phages as a routine treatment in the UK, we need to find and isolate a broad range of phages, develop them into usable drugs for specific infections and carry out careful clinical trials. However, from the extensive research and use of phage therapy in other countries, it does not exhibit any major safety concerns and with the rise in antibiotic resistance, there is increasing interest in carrying out phage therapy clinical trials in the UK.

How can we help?

Dr Ben Temperton, a microbial ecologist at the University of Exeter is working to create the first ‘library’ of phages in the UK. This means discovering and isolating new phages capable of destroying harmful bacteria. It also means storing and cataloguing them so that when a patient potentially needs ‘phage therapy’ a doctor can test the patient to find out which bacterium is infecting them and then access the ‘phage library’ to find the right phage to treat them with. Another key aspect of this work is raising awareness of the potential of phage therapy amongst clinicians and the public.

In collaboration with Exeter Science Centre, Dr Temperton is launching a fantastic Citizen Science project where members of the public can collect samples from water sources in their surrounding area and send them off to the Temperton Lab for his team to search for and identify phages. If a new phage is identified, the member of the public is allowed to name their phage! The phages will then be tested on a large number of common bacteria to identify which bacteria they are capable of destroying. Phages exist anywhere that bacteria do, so collecting samples from a broad range of locations and types of sources will help Dr Temperton’s team to hugely increase the number of phages in their library.

Like bacteria, not all viruses are bad and in fact life on Earth would not be possible without them. Not only could phages be incredibly useful in the fight against antibiotic resistant bacteria, but some research has even shown that phages may be useful in helping to treat cancer by targeting and destroying cancerous cells. Who knows, there might be hundreds of undiscovered phages all around you, just waiting to become the next “wonder drug”.

To find out more about the Citizen Phage Library project, check out our project resource page: