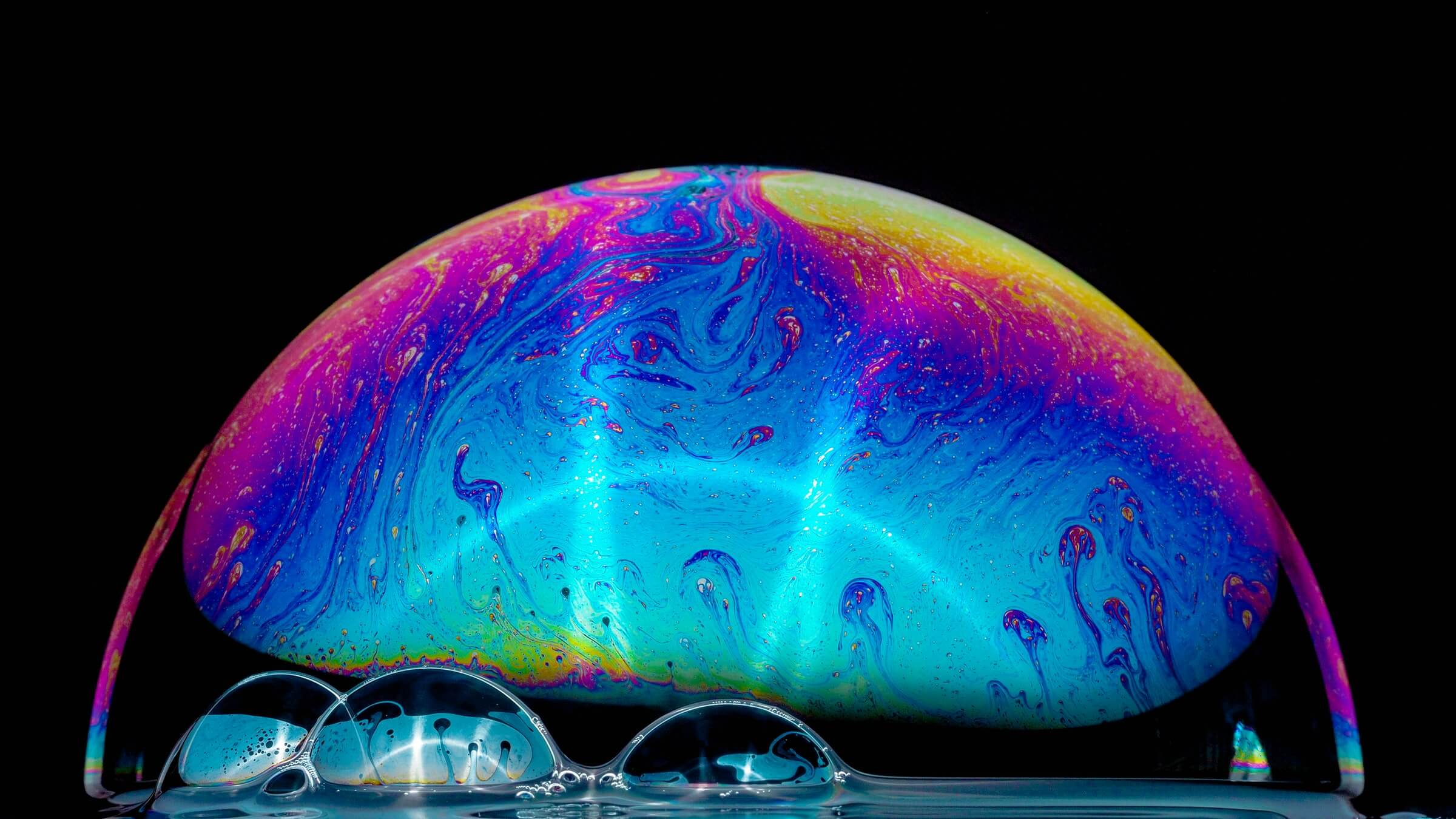 Why are bubbles rainbow coloured?

Image by Lanju Fotografie on Unsplash

In the bath, washing the dishes or playing outside – we all recognise the rainbow sphere of a soap bubble. But soap isn’t rainbow coloured, and neither is water… So what causes the beautiful spectrum on its surface?

A soap bubble is an ultra thin film of soapy water which encases a sphere of air. Even though the film is about 10 times thinner than a strand of human hair, it is actually more like a 3D wall than a 2D layer. The film has an inner and an outer surface, both of which can reflect light. This means that there are many different paths light can take when it interacts with a bubble.

What happens when light hits the surface of a bubble?

When light hits the bubble, part of it will reflect off the surface, and the other part will pass straight through. This also happens at the inner surface – of the rays that made it through the first surface, some will be reflected back and some will pass through. Essentially the surfaces cause the beam of sunlight to be split up into lots of separate rays travelling in different directions.

So how do all these reflections cause a rainbow?

Sunlight consists of rays of every colour, and each colour has a different wavelength. Each wavelength of light will partly be reflected at each surface, and partly transmitted. If the wave reflected from the top and inner surface emerge from the bubble in sync with each other (known in the physics world as being in phase), then they will reinforce each other (called constructive interference). On the other hand, if the waves are not in sync, then they will cancel each other out (called destructive interference). The wavelengths of light that interfere constructively determine the colour that appears on the surface of the bubble. This effect (technical term: thin film interference) is what causes the surface of a bubble to show all colours of the rainbow in a seemingly random pattern.

Why do different colours appear in different places on the bubble?

We had some fantastic entries to our Science as Art Gallery which relate to this phenomena – have a look at this colourful bubble photo from Jill, and the colour-changing beetle from Dr Mouchet. The latter case shows another beautiful example of light interference effects, this time created by the scales of a beetle, instead of the film of a soap bubble! Interference is an amazing way to create colour without using pigments. Can you think of any other colourful examples of interference? (Hint: dig out some of your old CDs and DVDs!)