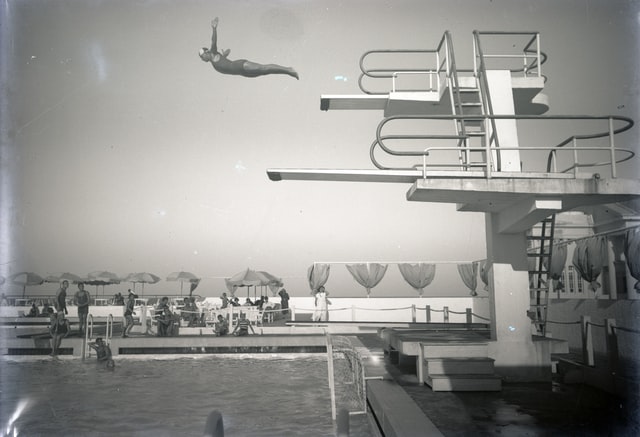 The physics of the perfect dive

The Tokyo 2020 Olympics have come to an end and Great Britain has had an impressive few weeks. We were particularly inspired by Tom Daley and Matty Lee’s Gold medal win, with an incredible set of 10m platform synchronised dives. If you missed their performance, check it out here.

Their spectacular display got us wondering… what makes the perfect dive and how is it that athletes seem to defy gravity as they twist and turn through the air before entering the water at a 90 degree angle?

The set up for the dive is vital as it lays the groundwork that enables the divers to begin their twists and tumbles. Not only do the divers need to push horizontally away from the platform to avoid injury, but they also need a good vertical lift to give themselves maximum time in the air.

They achieve this by bending their legs to store elastic energy in their muscles then pushing upwards whilst swinging their arms up to start their rotations. As soon as the diver reaches the apex of their jump, they begin to accelerate towards the pool due to gravity, and they have less than two seconds to do some amazing stunts!

It’s all about momentum

To understand the physics of diving we need to understand momentum. Anything that has mass (is made of matter) and is moving, has momentum. If it is moving in a straight line we talk about its linear momentum which can be calculated simply by multiplying its mass by its speed. When something starts spinning we need to consider its angular momentum, so we need to know its angular velocity (speed it is spinning at), its mass and its radius (the distance from the centre of mass to the edge of the spinning object).

We also need to understand one of Newton’s laws of motion- a stationary object will remain stationary unless an external force acts on it. Also, a moving object will continue to travel at a constant velocity unless an external force acts on it. This is also called the law of inertia and helps us to understand an object’s inherent resistance to changing speed or direction. When we are talking about spinning objects, we talk about the ‘moment of inertia’ which describes the object’s resistance to changing its rotational motion about an axis. This moment of inertia is generally calculated by multiplying the mass by the square of the radius but the actual calculation is quite complicated and depends on where the axis is and the exact shape of the spinning object!

Once the diver is no longer touching the board, their angular momentum must be conserved (or stay constant) until they hit the water. The conservation of momentum is a really important law in Physics that helps us to understand what happens in e.g. collisions and in this case, why tucking your legs in makes you spin faster. You can experience the conservation of angular momentum in your own home! If you have a spinning chair, sit on it with your legs outstretched and get someone to spin you around. As you’re spinning, bring your legs closer to your body and you will notice that you start spinning faster! If you decrease your radius, your speed has to increase in order for your total angular momentum to be conserved.

When preparing to enter the water, divers will stretch out in order to increase their moment of inertia, to decrease how fast they are spinning, and decrease their surface area as they collide with the water.

The smaller the splash on a diver’s entry into the water, the higher the score, with the aim being to slice into the water at a 90 degree angle. The divers place one hand on top of the other and hit the water with their palms to break the surface tension of the water and allow the rest of the body to pass through the hole made by their hands.

Even so, the force on the divers arms and shoulders as they collide with the water is huge, so they need to have very strong muscles to cope with the impact and you’ll often see tape on their wrists to prevent them from bending back too far in the wrong direction! By the time the divers hit the water they may have reached speeds of approximately 36.8mph, and in fact are still rotating but the aim is to give the illusion of a straight entry in that final millisecond before impact.

All things to consider the next time you are teetering at the edge of a pool and trying to avoid a belly flop! Not only this, but Tom Daley’s and Matty Lee’s Gold medal is that bit more impressive knowing that they had to synchronise their actions to perfection.